It's time for the holidays and Kenchii has put together a few discounted packages to celebrate. The prices listed below are the sales price for the Stylist. As a sharpener, you will get a special discount. I can't list that discount here, so give me or Wolff a call at 800-888-3832 to find out what your discount is. You also MUST be listed in Wolff's database as a sharpener to get the discounted price. If you are a stylist, and not a sharpener, give me a call at 864-381-8697 and I'll see if I can hook you up with a sharpener in your area that is selling this great line of shears. Here are the fliers and few descriptions: 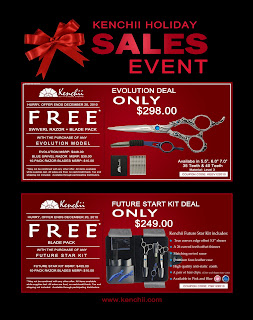 Click on the Picture to Enlarge
The first kit is the Kenchii® Evolution Kit. The Evolution is a beautiful shear that normally sells for $448.00. From now until December 20th Kenchii® is offering this shear, plus a Kenchii® Swivel Razor and a 10-Pack of razor blades for just $298.00. Code: KEEV122010

You'll also see Kenchii® has their Future Starter Kit on sale. This kit normally sells for $405.00, but is on sale right now for just $249.00. It's a great deal for students and stylists alike. It also comes with a 10-Pack of razor blades that usually isn't included in the kit. Code: FSK122010 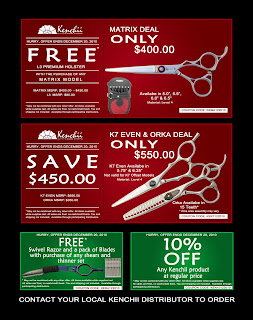 Click on the Picture to Enlarge
Above you'll see Kenchii® is offering their Matrix Shear with one of their top selling pouches. Shears and case together normally cost $480.00 to $510.00. Right now you get both for just $400.00. The Matrix is one of Kenchii's hottest sellers. Code: KEMA122010

Next in line is their K7 Even & Orka Deal. Both are dynamite shears, and if bought individually, would sell for $1000.00. Until the 20th they are on sale as a package for just $550.00. The K7 is a great shear, and the Orka is phenomenal. I can't say enough about the thinner, I sold one to my stylist and she swears it's the greatest thing since sliced bread. This is a great deal! Code: KEK7122010

Their are two other coupons listed above, so click on the flier to take a better look. When you call Wolff to order, be sure you have your coupon code handy. Let me know if I can answer any questions for you. 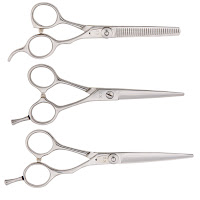 I have some disappointing news. Wolff's supplier for the LF Series Practice Beauty Shears has dried up. Wolff does have other practice shears they've replaced the LF Series Shears with for now to be sent out with machines, but they are no where near the quality of the old ones.

Wolff is on the hunt to find a suitable replacement if they can. I'll let you know what we find in the future, but for now; Wolff Practice Shears should not be sold as usable shears to your customers.
Posted by Jim at 3:45 PM No comments: 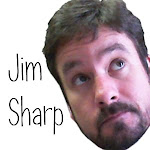